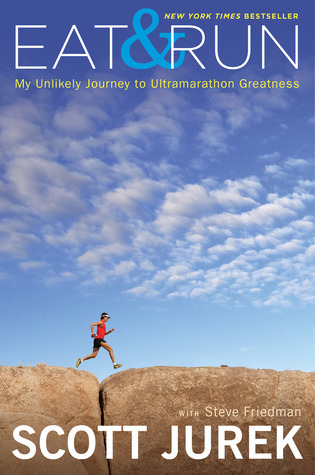 Eat & Run: My Unlikely Journey to Marathon Greatness by Scott Jurek is a straightforward memoir about Jurek’s journey to the peak of the ultrarunning world. Each chapter chronicles a stage of Jurek’s story. Jurek grew up amidst challenging household dynamics in the Midwest. His introduction to endurance sports came via Nordic skiing. Running was a way to train for skiing, so Jurek took it seriously.

Jurek ended up signing up for an ultramarathon and realized he excelled at the sport. From there, he took massive personal and financial risks. He cemented his place in the ultrarunning scene via seven consecutive victories at the storied Western States Endurance Run.

Although the first word of the book’s title is “Eat,” I was shocked by the extent to which Jurek focuses on his diet throughout Eat & Run. In fact, the book was largely an ode to veganism. Jurek explains what he ate throughout different stages of his life and running career. He thoughtfully describes how plant-based foods allowed him to recover faster than his competition. At the end of every chapter, Jurek offers a recipe tailored to runners. Of course, I will be trying a few out. His passion for miso is particularly intriguing; he uses the ingredient in quite a few dishes.

I must say, there were multiple sexist moments in Eat & Run. For example, Jurek proudly recalls that a friend of his coined the term getting “chicked,” which means being passed by a woman. For a man, this is understood to be embarrassing. Frankly, Jurek should be embarrassed he used the term in his book. Women have repeatedly proven they are especially good at endurance sports. There is no reason to feel ashamed of being passed by a woman unless one holds beliefs that women are inherently inferior and less capable. On further occasions, Jurek’s stories have “good ‘ole boys club” vibes. I’d prefer the ambassadors of ultrarunning make clear sexism is not acceptable.

Although I would not recommend Eat & Run to walkers, it is a must-read for runners- especially ultrarunners. Jurek led the ultraunning scene into its current spotlight. His stories, advice and insight are irreplaceable. After reading Eat & Run, I’m inspired to bag a few more FKTs.