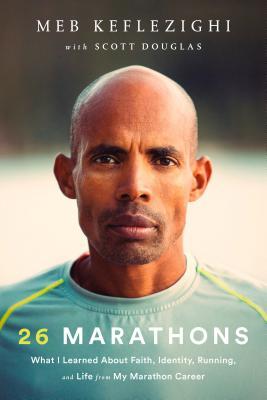 26 Marathons: What I’ve Learned About Faith, Identity, Running, and Life From Each Marathon I’ve Run by Meb Keflezighi & Scott Douglas is not a literary masterpiece. I would not recommend it to non-runners. But, if one likes to run, they will find 26 Marathons an inspiring account of the trials of professional racing.

Meb is perhaps the greatest male American marathoner to ever live (although I typically call authors by their first name, Meb is cemented in the minds of runners as Meb, so he will be referred to as Meb here). He holds an Olympic medal, a New York City Marathon title and a Boston Marathon title. He raced a harrowing 26 marathons professionally, all of which are recounted in 26 Marathons.

Throughout the book, Meb carefully takes us through each of his races. He explains how his past relates to his professional running career and the excitement and stress of each race. His personal accounts of life are beyond anecdotal remarks and fit well into the race narrative. However, the straightforward layout of 26 race recaps likely makes the book hard to swallow for most walkers.

Meb bravely and rightfully calls out those who mistreated him. Most noticeably, he recalls winning the Boston Marathon in 2014. He was the first American male to take the title in over 30 years and claimed this patriotic victory the year after the Boston Marathon bombings. While Boston was immensely grateful, some claimed Meb is not a “real” American because he is a naturalized citizen. Although he knows this is rubbish, it was not welcome commentary upon his victory.

Meb also recounts his maltreatment by Nike. While undoubtedly remaining the top male American marathoner, Nike slashed his compensation after a few bad races. Meb explains, as runners know: Nike is known to treat its athletes poorly. His decision to include the downsides to professional racing humanized a man whose other book it titled Meb for Mortals.

This all-time great at the marathon distance gracefully explains the goals available for every level of runner. He also addresses the myth that the runner who runs the hardest wins. Meb explains his most difficult professional races were those he bombed. As the miles ticked by, he became increasingly negative and had to push more than ever to continue. Although his muscles also screamed while running in the lead, his mood was, of course, much lighter.

For us athletes who love to hit the road or trail, 26 Marathons is a must-read.